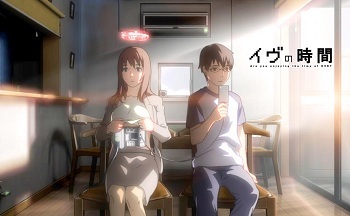 Within this establishment, there shall be no distinction between humans and robots
"Are you enjoying the Time of Eve?"
Advertisement:

Time of Eve (イヴの時間 — Eve no Jikan) was created by Yasuhiro Yoshiura, who previously worked on Pale Cocoon, and released as six web-streamed episodes over the course of 2008 and 2009.

Robots and androids have become commonplace in Japan during the near future. Their prevalence have led humans to accept robots as a part of life, although some organisations run an anti-robot media campaign and a popular news item involves individuals that have abandoned normal social interactions for the company of obedient androids; being nigh-indistinguishable from their human counterparts, save the holographic status rings hovering over their heads. The events in Eve No Jikan focus on Rikuo, a young man who comes across something unusual whilst examining the debug logs of his android, Sammy. He finds that she has been making unscheduled trips to an unknown location that only leaves a cryptic note in the log reading, "Are you enjoying the time of EVE?" Heading to the coordinates in question, Rikuo and his friend, Masaki, discover an odd cafe with an odd rule, that "Within this establishment, there shall be no distinction between humans and robots."

Time of Eve was also released as a feature film (Time of Eve: The Movie) with a new ending and additional scenes linking the six episodes together. The six episodes are streamed on Crunchyroll

, and the feature film is available for purchase and rental on the iTunes Store

(as of January 2012 in the US, Canada, Australia, NZ, and Japan). The film and episodes were released as a Blu-ray and DVD in Japan (with English subtitles). The subbed version was also put on the iTunes store

for the US, UK, and Canada.

was made to fund the release of an international version of the movie on Blu-ray. It made its funding goal of $ 18 000 in less than a day. The surprised campaign hastily announced a stretch goal of $ 50 000 to produce an English, and this goal was reached a few hours later.

Time of Eve provides examples of: