Anime / Under the Dog 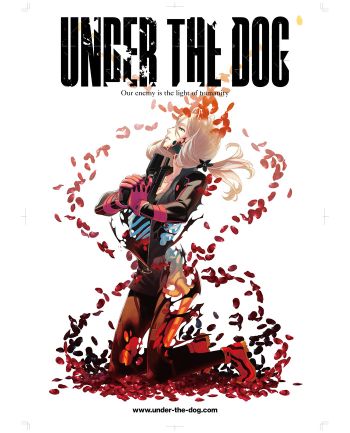 "Our enemy is the light of humanity."
"Under the dog, we are forced to exterminate ourselves."
Advertisement:

It is 2025, five years after the 2020 Tokyo Summer Olympics were struck by a devastating terrorist attack. In the aftermath, the United Nations formed a special counter-terrorist unit dedicated to hunting down and destroying the organization responsible. Using the cover of the International School for Boys and Girls, particularly gifted high school students are recruited and coerced into the service of a specialized death squad to find and destroy the terrorists.

is an anime science fiction thriller by Creative Intelligence Agency, LLC (no, not that CIA) funded by Kickstarter. The 30-day fundraising campaign began on August 8, 2014 with a goal of $580,000 and achieved that goal on September 4, three days ahead of schedule. The campaign ended on September 7 with $878,028 (151% of the initial goal), making Under the Dog the most funded animation project on Kickstarter. The staff behind Under the Dog includes names such as director Masahiro Ando, character designer Yusuke Kozaki, and scenario writer Jiro Ishii, with animation to be done by Kinema Citrus.

The funding model is stated to be the first of its kind: while other titles such as Little Witch Academia used Kickstarter to supplement their budget, Under the Dog was an anime fully funded by crowdsourcing. The production team specifically stated that they chose the Kickstarter route instead of more traditional funding methods to ensure that they retain full creative freedom of the project.

On September 2, 2014, Hideo Kojima made an endorsement of the project. A few days later

Under the Dog was released as a 24-minute OVA on August 1, 2016 for its Kickstarter backers.

On October 29, 2016, the series has entered in a new partnership

and will expand beyond crowdfunding in the future.

The pitch trailer is here.

A key animation trailer is here

On October 20, 2017, another Kickstarter was begun

, aiming to fund a special edition that will include a live action short and new ending theme music video.