"...Jorvik has always cherished its strong and lasting bond with its horses, and some say they're the very soul of the island."
''Star Stable'' 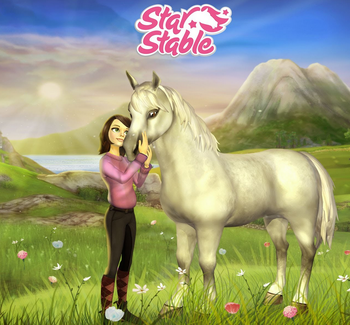 Star Stable is an MMO horse game and the sequel to the Starshine Legacy games. First released in 2005 by Star Stable Entertainment and playable here

, the player creates a starter horse and rider to begin with, though many other horses are available in-game.
Advertisement:

The player character is introduced as having come to the fictitious island of Jorvik, famous for its love of and close connection with horses and the equestrian arts, for a summer. However, what is supposed to be a summer of fun and horses quickly goes awry when a greedy construction company, GED, threatens to tear down the local stable. After stepping up to help drive off the developers, the player is drawn into a series of horse-related adventures, from riding in races and mucking out stables to stopping corporate greed from destroying the island's wonders.

The Soul Riders series of novels, written by Helena Dahlgren, is set in the Star Stable universe.