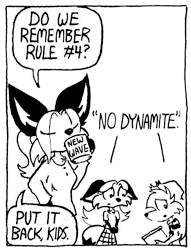 "If somebody you knew, whether they were a criminal or a window washer, constantly talked about "the rules", you would never want to hang out with this fuckin' nitwit, would you? You're washing the window and the fucker says, 'Rule #1. No streaks.' What an annoying dude. Get him away from me."
— Vern,

He's in a dangerous or uncomfortable situation with other people who are less experienced or trustworthy than him, and he wants to make some things clear. So he bluntly declares a numbered list of "rules" for the situation. Beginning, of course, with Rule Number One, and following it with Rule Number Two, and so forth. The implication of setting out these rules, and providing a semblance of structure by numbering them, is that they are resolute and unquestionable, and that breaking these rules will lead to dire consequences.

Given the nature of storytelling, expect these rules to be bent or outright broken at some point before the story is done. Often quite ironically.

Another situation is conveying advice or admonishments, such as with the Mentor Archetype or Old Master. In this case the rules could be 'don't use the Dangerous Forbidden Technique' or 'always believe in yourself'. They are likely to include Rule Zero: "I'm always right."

One version of this trope became so popular that 90% of these will be Stock Shout-Outs to Fight Club — "Rule Number One of [X]: You do not talk about [X]" and/or "Rule Number One: [Y]. Rule Number Two: [Y]!"

There Are No Rules is a inversion, though that itself is sometimes called "Rule #1" nonetheless. This can then be subverted by having other rules follow which are actually restrictive.

The Thieves' Guild most often has each of its members adhere to certain numbered rules.

For the other Rule Number One, see Old Master.

Characters who live by The Rules are obviously on the Lawful side of Character Alignment, but there's nothing stopping them from being Lawful Good or Lawful Evil. In fact, expect the latter from the Obstructive Bureaucrat who can cite any Rule that justifies him/her not doing anything remotely reasonable or helpful.

See also Things You Are Not Allowed to Do.