"Of course I am a thug. You are a thug. What is the Emperor, if not another thug? Thugs win, Richard."
—John Lavisser 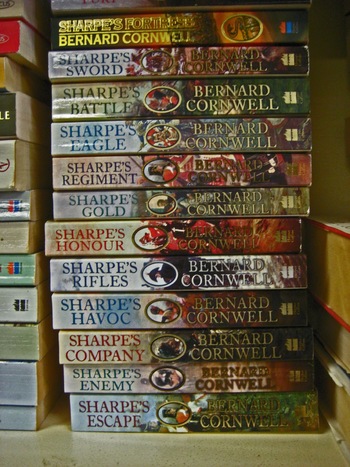 Sharpe is a series of historical fiction stories by Bernard Cornwell centered on the character of Richard Sharpe.

Sergeant Richard Sharpe saves the life of Sir Arthur Wellesley (from three Frenchmen on TV; from at least half-a-dozen Maratha Indian warriors in the novels) and is rewarded with a Field Promotion, making him an officer in the British Army. As a gutter-born bastard, Sharpe doesn't play well with regular officers, the rich gentlemen who bought their commissions and resent an upstart from "the ranks" being among their number. But Sharpe's field experience, rough nature and damn good fighting skills give him an advantage when it comes to commanding soldiers. He leads from the front with a Baker rifle and massive Heavy Cavalry sword, and never far from his side is longtime friend Sgt. Patrick Harper and a unit of elite riflemen. When not fighting some great bloody battle, Sharpe and his companions are often sent on missions vital to the war effort by Wellington himself or his intelligence officers. Despite being poor and lacking "gentlemanly conduct", Sharpe achieves further promotions on his merit alone, rising to the rank of Lieutenant Colonel by the Battle of Waterloo.

In publication since 1981, the series of novels chronicle Sharpe's adventures in India, Portugal, Spain and beyond, from the beginning of his career to the very end. Though a fictional character, he's portrayed as being in the thick of real battles that occurred during the Napoleonic Wars, from the Siege of Seringapatam to the Battle of Waterloo; the novels are as much about the Duke of Wellington's campaigns shown from a new perspective as he fights the armies of Napoléon Bonaparte. Cornwell has been writing and publishing the novels out of chronological order: Sharpe's Eagle, published in 1981, is 8th in the series; Sharpe's Devil, chronologically the last in the series, was published in 1992, and Sharpe's Assassin, the most recent novel published, is 21th in the series.

The novels have been adapted into a series of television movies starring Sean Bean as Richard Sharpe, alongside Daragh O'Malley as Patrick Harper and a slew of British talent in supporting roles (see Trivia), running regularly between 1993 and 1997, and with two additional miniseries in 2006 and 2008. The series was well-received and proved a breakout role for Bean, who went on to star in GoldenEye, The Lord of the Rings and Game of Thrones. Much of the plot and backstory from the novels was compressed, modified or jettisoned, and several new stories were invented for the screen.

How badass is Sharpe? Well, put it this way: he survived being played by Sean Bean!

Tropes found in the Sharpe Series:

Boromir would have fared better if he could fire three rounds per minute in any weather!