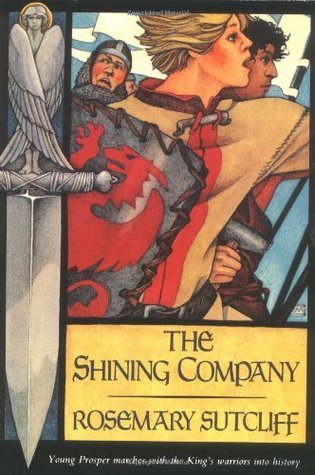 "Is that a giant angel-sword behind us?"
Advertisement:

The Shining Company is a Young Adult Historical Fiction novel by Rosemary Sutcliff published in 1990. It was her last completed novel before her death and later won the 2010 Phoenix Award.

A hundred years after Artos and his Company of three hundred cavalry united Britain’s forces against the invading Saxons, the Britons have fractured once more into the petty kingdoms of the Old North. Under the growing threat of the Saxon kings of Deira and Bernicia, King Mynyddog of the Gododdin summons the second sons of the North and West to form a new Three Hundred.

The Shining Company is based on the Welsh elegiac poem Y Gododdin, commemorating the fallen of the Battle of Catraeth circa 600 CE. It was traditionally attributed to the bard Aneirin, a supposed eyewitness.

The Shining Company contains examples of: