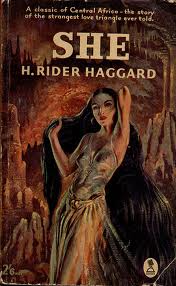 She is an adventure novel by H. Rider Haggard, first published in serial form in 1886.

Cambridge don Horace Holly and his handsome ward Leo Vincey are guided by a Vincey heirloom to a lost African kingdom ruled by the immortal queen Ayesha, whose subjects call her "She-Who-Must-Be-Obeyed". Ayesha believes Vincey to be the reincarnation of a man she loved and lost centuries ago, and becomes vengeful when he becomes romantically attached to a local girl, Ustane.

She was Haggard's second big success after King Solomon's Mines, and was followed by a sequel and two prequels, one the story of Ayesha's early life and the other an Inevitable Crossover in which the protagonist of King Solomon's Mines visits the hidden valley. It has been filmed multiple times, including a 1935 movie starring Helen Gahagan as Ayesha, a 1965 Hammer Film Productions movie starring Ursula Andress as Ayesha, Peter Cushing as Holly, and Christopher Lee as Billali (one of the tribesmen who worship She); and a 1984 movie starring Sandahl Bergman.

The sequels and prequels provide examples of: