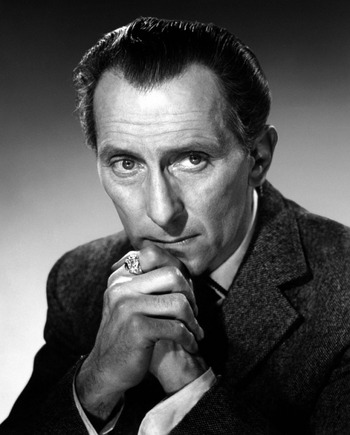 "A moment, I've just spotted Christopher Lee..."
"I don't think there is really a favourite, I'm very fond of film making as a whole and as a medium and of course, there are some that I've enjoyed making more than others but I've enjoyed making all of them."
Advertisement:

Peter Wilton Cushing, OBE (May 26, 1913 – August 11, 1994) was an English actor of stage and screen. He was particularly famous for his roles in Hammer Horror films, including Baron Victor Frankenstein in 1957's The Curse of Frankenstein and Dr. Van Helsing in 1958's Dracula (called Horror of Dracula in the US), both of which starred him opposite Christopher Lee; the two would become lifelong friends and appear together in numerous other films throughout the years. Cushing's birthday also happened to be the very day before Lee's and that of another iconic Gothic Horror film star who would end up co-starring with him, Vincent Price (both on May 27).

Before he was launched by Hammer, Cushing appeared with Laurel and Hardy in A Chump at Oxford and played the small part of Osric in Laurence Olivier's 1948 film of Hamlet (which also had Christopher Lee as an extra, making it their first movie together), as well as several notable roles in television, including Winston Smith in the 1954 adaptation of 1984 and Darcy in the 1952 adaptation of Pride and Prejudice. He returned to television several times after his film career took off, starring as Lije Bailey in a 1964 adaptation of Isaac Asimov's The Caves of Steel and Sherlock Holmes in the 1968 TV series. He also appeared several times with Morecambe and Wise, as part of a years-long Running Gag where he would come on to demand payment as the two hosts did everything they could to weasel out of their obligation.

He also played Doctor Whonote As in, for these movies, the character was actually called "Doctor Who", instead of the canon "The Doctor" in two non-canon films, Dr. Who and the Daleks and Daleks' Invasion Earth: 2150 A.D.. He is also recognisable for playing Grand Moff Tarkin in the first Star Wars film, A New Hopenote He certainly didn't grouse about his role like Alec Guinness with his aggravated snobbery. Indeed, Cushing relished the influx of new fans to his work. A digital recreation of his likeness was utilized to have Tarkin appear in Rogue One in 2016, with Guy Henry serving as the motion-capture and voice actor giving the actual performance.

He was made an officer of the Order of the British Empire in 1989.

He died of prostate cancer on the 11th of August, 1994, aged 81. In an interview after his death Christopher Lee remarked: "I don't want to sound gloomy, but, at some point of your lives, every one of you will notice that you have in your life one person, one friend whom you love and care for very much. That person is so close to you that you are able to share some things only with him. For example, you can call that friend, and from the very first maniacal laugh or some other joke you will know who is at the other end of that line. We used to do that with him so often. And then when that person is gone, there will be nothing like that in your life ever again".

Cushing often played characters who were either very driven or villainous, but Cushing in Real Life was a very kindly gentleman who was devoted to his wife and friends. When she died, he was so distraught that he tried to kill himself by running up and down the stairs in a fit of depression, knowing that he had a heart condition. Near the end of his life, he was given a surprise by Jimmy Savile on his show Jim'll Fix It — a breed of rose was named after his late wife. It caused him to burst into tears on camera. Carrie Fisher recalled that she could not generate the level of hatred that Princess Leia would have been feeling towards Grand Moff Tarkin as he was so incredibly charming and politenote and also because he wore bedroom slippers for tight shots as the riding boots the costumers had procured were too small and hurt his feet (he had large feet and usually wore custom-made footwear, but the production didn't have the time to get a pair of boots specially made), and had particular trouble saying the line about "recognizing [his] foul stench" when he smelled pleasantly of pipe tobacco and lavender.

Despite being best-known for his horror work, Cushing freely admitted that he wasn't an especially big fan of horror as a genre — not that he hated it, but he wasn't as much into it as his fans sometimes assumed. However, he never expressed any particular angst over being typecast in this kind of movie, repeatedly saying that as long as he was making people happy, he was happy. And while he did publicly admit to disliking a few of the movies he was in — namely The Blood Beast Terror, which he called the worst film he'd ever done — he was always a professional, never phoning in his performance or taking his dissatisfaction out on his on-set colleagues.

He was also One of Us, being a big fan of War Gaming and painting the little model soldiers.