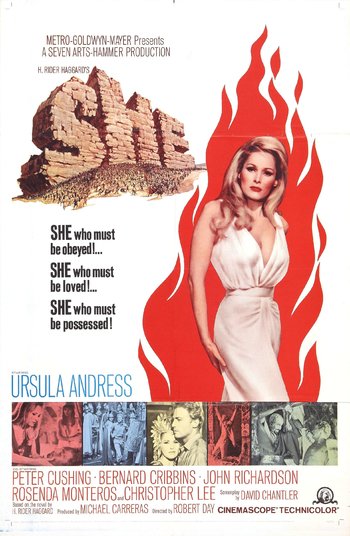 She is a 1965 Hammer film based on the novel She: A History of Adventure by H. Rider Haggard, directed by Robert Day and starring Ursula Andress in the title role, Peter Cushing as Horace Holly, Bernard Cribbins as Job, John Richardson as Leo Vincey, Rosenda Monteros as Ustane, and Christopher Lee as Billali.

It is 1918. The Great War is over, and Horace Holly and Leo Vincey have recently been demobbed from the British Army. Seeking adventure, they go in search of the lost African city of Kuma, ruled by the immortal queen Ayesha (aka "She Who Must Be Obeyed").