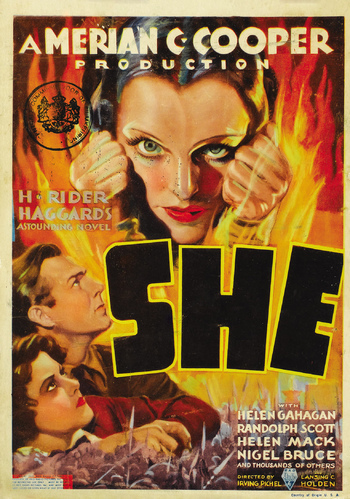 She is a 1935 adventure film based on the novel She: A History of Adventure by H. Rider Haggard. The film stars Helen Gahagan in the title role, Randolph Scott as Leo Vincey, and Nigel Bruce as Horace Holly. It was directed by Lansing C. Holden and Irving Pichel.

Leo Vincey is charged by his dying uncle to follow the route in an old journal left by their ancestor John Vincey, who set out five centuries earlier to find the fountain of youth. His expedition (which also includes Horace Holly, a guide named Tugmore, and Tugmore's daughter Tanya) discovers the ancient lost city of Kor, ruled by the immortal She Who Must Be Obeyed, who loved John Vincey and believes Leo to be his reincarnation.