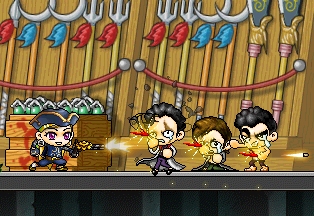 "Why, I felled three mooks with one shot!"
Liara: Did you really take out three Blue Suns mercenaries with one bullet?
Garrus: No, of course not. The third guy had a heart attack. Not fair to count him.
— Mass Effect 3
Advertisement:

Otherwise known as overpenetration in gun-play circles, this happens when a bullet doesn't stop in a body or object once fired.

This can happen when one uses armor-piercing rounds on soft targets, but it is more Truth in Television than you might think, even without rifles explicitly using high-powered armor piercing rounds. One of the rules of weapons safety requires a shooter to know what is behind a target and always assume that a bullet will overpenetrate the first target and still retain lethal velocity.

Also a common weapon or Power-Up in Shoot 'em Up games, especially when you've got a Charged Attack.

Contrast Bulletproof Human Shield, where the bullets should be able to do this but somehow don't. Also contrast Guns Are Worthless; a game's failure to implement (over)penetration may be a contributing factor to that.