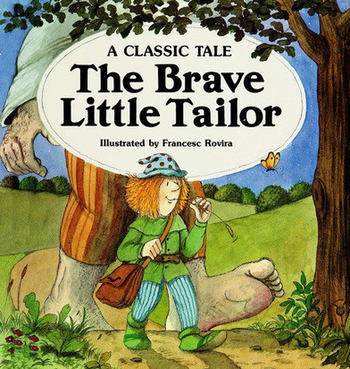 (or The Valiant Little Tailor) is a German fairy tale collected by The Brothers Grimm, listed as tale number 20.

A tailor is preparing to eat some jam, but when flies land on it, he kills seven of them with one blow. He later makes a belt describing the deed: "Seven with one blow", then setting out into the world to seek his fortune. The tailor encounters a giant in his travels that assumes the phrase on the belt to refer to the slaying of seven giants. The giant issues a challenge to the tailor; and the tailor handily defeats the giant in the challenges by use of simple wit. The giant then takes him to other giants and makes plans to kill the tailor in his sleep. The plan fails, however, as the tailor decides to sleep in the corner, having found the guest bed too large. Upon finding the tailor alive, all of the giants decide to flee in fear.

The tailor later joins the royal service, but is feared by the royal guards. The guards appeal to the king to remove the tailor from service. The king responds by sending him on a chain of difficult quests. After completing the quests, the tailor returns, receiving half the kingdom and the king's daughter in marriage. His wife later hears him mutter in his sleep that he is a simple tailor; though a squire later warns him and he decides to speak of legendary deeds while sleeping as well to remedy things.

Not to be confused with The Brave Little Toaster.

Tropes associated with this tale: