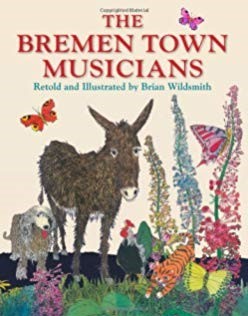 "The Bremen Town Musicians" (Die Bremer Stadtmusikanten) is a German folk story about a group of animals who decide to run away and form a musical troupe. Unfortunately, although they don't realize it, their singing is beyond awful, and their first "concert" scares away its audience: a group of robbers stationed in a cottage. The animals settle into the cottage, and when the robbers return by night, again repel them, mostly because of the robbers' own superstitious fears. The animals decide to remain at the cottage, and live happily ever after.

The story is short and lighthearted, more a folktale than a Fairy Tale. It was collected by The Brothers Grimm and included in their Children's and Household Tales.

Franz Xaver von Schönwerth collected a different version in his From the Upper Palatinate. Customs and Sayings book called The Wandering Animals (German: Die Wandernden Tiere). Among other differences, the group of animals were made up for a dog, a cat, a rooster, a fox, an ox and a horse.

The Brothers Grimm's tale can be read in the SurLaLune site

Although it has not achieved the prominence of other stories collected in Children's and Household Tales, it remains a fairly popular and easily adaptable story for children, and the motif of the animals standing on top of each other from a famous statue is well-known in some parts of the world.

Famous adaptations of this story