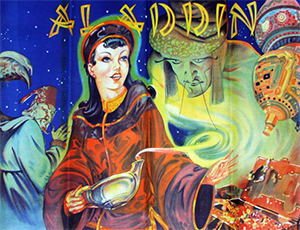 Aladdin is an Arabian folk tale originally written by Syrian Maronite writer Hanna Diyab sometime in the early 18th century. Contrary to popular belief, it is actually not one of the original stories found in A Thousand and One Nights. More on that in the Other Wiki.

Like most folktales, "Aladdin" has undergone some major revisions, but the original story is as follows: Aladdin is a poor young man living in China (Theoretically In Name Only, as while the setting is completely Islamic, it should be noted the western edge of China or Xinjiang is Islamic and highly influenced by the Middle East with the Uyghur script itself using Arabic). He has no job and lives off the little money his widowed mother can bring in; his father died from grief at such an irresponsible son. One day, an evil Maghreb sorcerer approaches him, claiming to be his father's brother but in fact seeking to use him for his own benefit. He gives Aladdin a ring and sends him into a magic cave to retrieve an old oil lamp, but when Aladdin struggles on the last step, the magician's impatience gets the better of him and he seals the cave with Aladdin and his lamp inside. Fortunately, he's still wearing his Magic Ring which, when rubbed, releases a Jinn who brings him out. When he gets home, Aladdin's mother starts cleaning the lamp, releasing a far more powerful Jinn who grants Aladdin his every wish.

Over time, with the use of the lamp, Aladdin becomes vastly wealthy. He even gains the Sultan's favorite daughter for his wife. However, the sorcerer realizes that Aladdin must have escaped with the lamp, so he steals it with a ruse, then takes Aladdin's palace, along with his wife and all his possessions, to his home in Maghreb.

Aladdin despairs, but all is not lost, because he still has that magic ring. While the Ring Jinn can't simply undo the Lamp Jinn's magic, he can transport Aladdin to his palace, where he frees his wife, beats the bad guy, and gets his lamp back.

Note that, thanks to its adaptations to Pantomime and assorted very successful movies, this story has been severely prone to Audience-Coloring Adaptation verging on Adaptation Displacement. For example, the evil vizier Jafar (however spelled) is basically a movie addition (his name comes from a whole different place), and the idea that Aladdin's mother is called "Widow Twankey" is a pantomime joke (based on the name of a cheap brand of China tea).

A version of the tale, as translated and published by Sir Richard Burton in his famous 19th Century edition of the 1001 Nights, may be found here