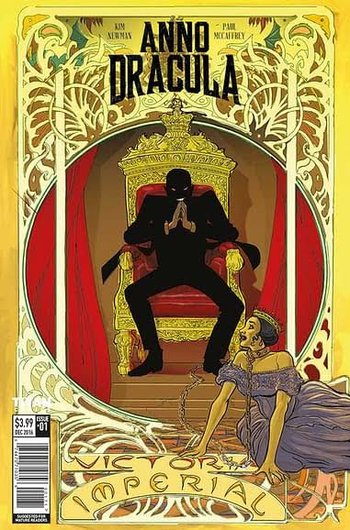 "...Dracula came out of Transylvania to conquer London, bringing with him horrors most of Europe didn’t believe in or had forgotten."
"Factions would worship the new boss-god, trying to believe they alone would be saved as genocide tallies rose. Rebellions would be crushed. The Princess might imagine banishing all bad people – by her definition – with her ossification beam. But she wouldn’t chuck a bug grenade into the marketplace. She was a ruthless moralist, not a sociopath. Even as a terrorist, she’d been purposeful. The Light Years – Anni Lux – would be crushingly horrible. But Zeroworld would be worse. Jun Zero was a nutter. He wanted a killing jar the size of a planet."
—Richard Jepperson on Jun Zero, Anno Dracula 1999: Daikaiju
Advertisement:

The dark and zany Multiverse of Kim Newman is a Massive Multiplayer Crossover which is home to some truly vile villains.

Series are sorted by release date of first book.