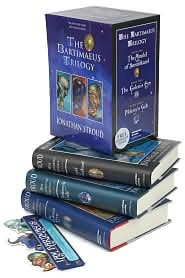 In an alternate version of modern London, a world ruled by magicians, a precocious young apprentice magician named Nathaniel summons the ancient, powerful, wisecracking djinni Bartimaeus to steal a valuable amulet. He quickly finds himself caught up in a dark world of corruption and political intrigue with the unwilling djinni in tow.

As Nathaniel learns to navigate the realm of magic and politics, he crosses paths with Kitty Jones, a "commoner" with ties to the mysterious group called the Resistance.

The trilogy by Jonathan Stroud:

In 2019, Start Media optioned both film and television rights for the series.