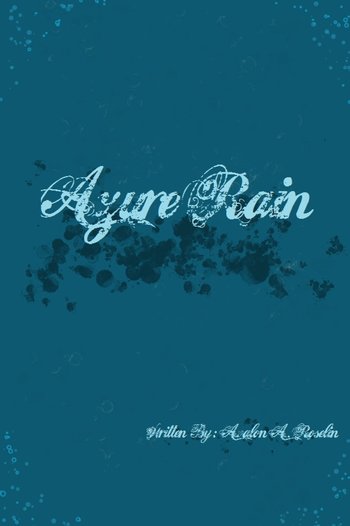 Azure Rain is a series of books written by Avalon A. Roselin. It has been announced that there will be four main series books, a prequel, and spin-off that will not feature the main four characters, and a guidebook complete with language dictionary. Currently only the first volume is available for purchase online through Lulu.com, Amazon, and Nook in paperback and ebook format. Whether or not there will be more books in the series, such as a collection of short stories, is yet to be determined.

The first volume of the series and series namer, Azure Rain’s plot centers on clearing Azzie’s name after he is wrongly set up to be his caretaker’s murderer by bringing the true killer to justice. That quickly becomes the least of ex-murder investigators Eureka and Baltan’s priorities when they get caught up in the plot of a maniacal cult leader. Along the way they meet Lleuwellyn, rounding out the main cast. Though Baltan and Eureka are more or less the main characters of the first book, all four of them are the main characters of the series, with varying degrees of minor characters supporting them.

The book is notable for balancing themes of murder mystery, slice of life, and occult horror, taking time where it needs to set up character relationships while the situation around them grows steadily more dire as the intended date of the murders gets closer. The series is set in a fantasy world that has received extensive world building, which serves to be one of the highlights for many readers.

The next book in the series is Crimson Lightning. Its plot centers more on Kwoltan Gera, and the book kicks off with Keida and Naesa returning home to a destroyed village and setting out to find where the missing members were taken to, along with the main cast of Azure Rain. As such it features a lot more of what tribal Azure life is like than Azure Rain, and also introduces a lot more characters since the previously minor Kwoltan Gera characters—though still fairly minor—are developed a little more, and the readers are introduced to the mountain tribe.

Like Azure Rain, Crimson Lightning also balances out the murder mystery/serious plot with lighter moments of family bonding and even a few romantic subplots. It focuses a bit more on Eureka and Keida’s pasts and relationships with each other and the rest of the tribe. It has been slated for release in late 2014/early 2015, so its tropes only cover what has been released so far.

The entire series shares a character page, so be extra careful of spoilers that might come from later installments.