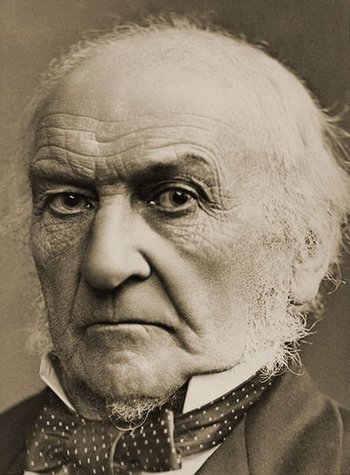 William Ewart Gladstone (29 December 1809 – 19 May 1898) was a British Liberal Party statesman and four times Prime Minister of the United Kingdom (1868–74, 1880–85, February–July 1886 and 1892–94). He was known as G.O.M. which to most people used to stand for "Grand Old Man" but his long term rival Benjamin Disraeli always said stood for "God's Only Mistake." He was a champion of Home Rule for Ireland. When Disraeli died Gladstone proposed a state funeral (to make political capital on his rival's death) but Disraeli's will stipulated other arrangements. To this Gladstone replied, "As Disraeli lived, so he died — all display, without reality or genuineness."

He was also on bad terms with Queen Victoria, in part because she liked Disraeli so much. She once complained, "He always addresses me as if I was a public meeting".note Grammar Nazis: Technically, this is gramatically correct, but today "were a public meeting" would be more common in British usage. Note that American usage—which for the longest time was more conservative (in the sense of preserving old modes of speech)—still regards this construction as essentially unobjectionable. On the other hand, Albert, Prince of Wales (later Edward VII) counted Gladstone as a friend; Gladstone appreciated the Prince's desire to be useful, appointing him to various commissions and giving the personable heir a role in the social aspect of diplomacynote i.e. meeting visiting foreign heads of state and government and showing them a good time—feasting, drinking, whoring (if that was the guest's thing), the opera, and particularly shooting when they were in Britain, and being shown a good time with foreign heads of state and government abroad. The idea of this—which worked, by the way—was so that said foreign heads of state and government could say "Well of course we're on good terms with Britain, why only last week I took the Prince of Wales to a marvellous opera and treated him to the finest dinner our country could offer, during which he was a most excellent guest, and we all enjoyed it immensely." while the Queen hated the idea of the Prince having any official role at all. This caused a great deal of tension between the three of them, and Gladstone occasionally evinced a desire to see the elderly Queen abdicate in favor of her son; naturally, this made her hate him even more.

Fun fact; besides Churchill (who turned down becoming Duke of London for his own reasons), Gladstone is the only PM to have served between 1861 and 1961 not to get an earldom who didn't already have a peerage or die while still in the Commons; when he resigned in 1885, he refused an offer of an earldom from the Queen.

Prior to becoming PM, he had initially been a Conservative, before joining the Peelite faction that merged with the Whigs and Radicals to become the Liberal Party. His early political career is quite a contrast from his later reputation as a liberal. The first speech made by Gladstone in the House of Commons had him opposing the 1833 Abolition of Slavery. Gladstone was the son of Sir John Gladstone, one of the largest slaveowners in the world at the time, owning great wealth and property in the West Indian sugar plantations, all of which ran on slave labour. William Gladstone petitioned for the slaveowners of the plantation to be compensated for their wealth and succeeded in this endeavour. His father John Gladstone received £93,526 from the British Government for the "loss" of his 2,039 slaves and Gladstone also campagined for compensation for other ex-slaveowners. Gladstone also expressed public support for the Confederates during The American Civil War, not on principle (by that point a true liberal, he had come to oppose slavery, although not as full-throatedly as some) but based on his understanding of the British national interest (not simply cheap Southern cotton for British mills—although that was important—but preventing a new power from arising to challenge Britain's dominance of the Americasnote In the 19th century, Britain basically controlled trade between Europe and Latin America.; splitting the upstart United States in half would have obviously nullified that threat).

He had served as a junior minister under Peel, and as Chancellor of the Exchequer under The Earl of Aberdeen (during whose premiership Gladstone delivered the longest-ever Budget speech, clocking in at four hours, 45 minutes)note The sole exception to the rule that eating and drinking are forbidden in the Commons chamber is that the Chancellor is entitled to drink whatever he/she likes during the Budget speech; usually, it's alcoholic, as the Chancellor typically needs a freaking drink after it. Gladstone managed to pull this one off with just a single glass of sherry and beaten egg, so...kudos., The Viscount Palmerston (with whom he was constantly at loggerheads), and Earl Russell. Noted for his skill as a financial administrator, he would be his own Chancellor several times after becoming PM.

In his first premiership Gladstone reformed the Civil Service, Army and local government to make individual advancement easier and fairer, among other things abolishing the sale of commissions. In foreign affairs his overriding aim was to promote peace and understanding. When he lost the election he gave up the leadership.

Then in 1880 the Liberals won again, and the new Liberal leader Lord Hartington retired in Gladstone's favour. Gladstone won two seats in this election so had to give one up. Queen Victoria did in fact ask Hartington to form a ministry, but was convinced to send for Gladstone. Gladstone had opposed himself to the "Colonial hobby" pushing for the scramble for Africa. He thus saw the end of the Second Anglo-Afghan War, First Boer War and the war against the Mahdi in Sudan, but was unable to end the war with Egypt. In practice the empire actually expanded significantly under his premiership.

In 1886 Gladstone's party allied with Irish Nationalists to defeat Lord Salisbury's government. Gladstone regained his position as PM and combined the office with that of Lord Privy Seal. Then he introduced The Home Rule Bill for Ireland. The issue split his party, resulting in Hartington forming a splinter group called the Unionist Party which allied (and eventually merged) with the Conservatives, and thus killed his government — and in the longer term, it would kill the Liberals as a party of government, full stop, as they would only win one more majority (under Henry Campbell-Bannerman in 1906), and otherwise needed to rely on the Irish MPs to keep their governments in power, leading to them declining into near-irrelevance after most of Ireland broke away from the United Kingdom in the aftermath of World War I.

The general election of 1892 resulted in a minority Liberal government, with Gladstone as Prime Minister for the fourth and final time. Gladstone, at the age of 82, was both the oldest ever person to be appointed Prime Minister and when he resigned in 1894 aged 84 he was the oldest person ever to occupy the Premiership. In his address he promised Home Rule and the disestablishment of the Scottish and Welsh Churches, but failed. (The Welsh Church was disestablished after his death; the Scottish Church remains established to this day, with result that the Queen is the "Supreme Governor" of two subtly different Christian denominations on either side the border.) The Home Rule was killed by The House of Lords and legislation about the churches never even got onto the table. He started to gain opposition in both the actual opposition and his own party, he so resigned as Prime Minister.

In her penultimate slight against her least favourite Prime Minister, Queen Victoria did not ask him who would succeed him as Prime Minister and sent for Lord Rosebery; Gladstone wanted Lord Spencer. He retained his seat in the Commons until 1895.

And finally, aside from his considerable oratorical talents and skill as a financial manager, the thing Gladstone was known for was his Christianity; he was, to put it mildly, at little evangelical, which translated to inviting the poor off the streets into Downing Street for a free dinner meal...after they had listen to him preach the Word and rattle on about sin and poverty and try and convince them to convert and/or be better Christians. This was actually a fairly common practice for the pious and socially-conscious well-to-do at the time, but Gladstone's prominence made it unusual even before he became leader of the Liberals. He would also sometimes hire prostitutes to tempt him to prove his self-control to himself, and would send them away if his discipline began to falter. It was another bone of contention with the rather more laissez-faire Disraeli.