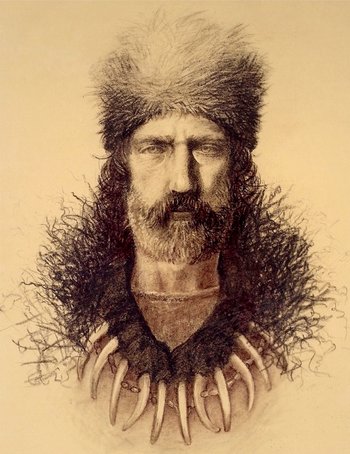 A great American Folk Hero, Hugh Glass (ca. 1780-1833) was a man of many involuntary careers. During his life, he was a Pirate, a White Man Gone Native, a Mountain Man, but above all, one of history's greatest badasses.

For most of his life, he was just a sailor like any other sailor, from age of 13 til he was 37. Then, a man named Jean Lafitte turned his life upside down. Jean Lafitte, a pirate of the Mexican Gulf, attacked Glass' ship, killed half of the crew, and forced the rest, including Glass, into servitude as pirates. Dissatisfied with the pirate life, he opted to flee from the ship with a companion, Clive Hastings, a year later, by swimming to shore. In Texas. They then began walking to Kansas, for the first time displaying how much of a Determinator he really was. While they were very successful at evading natives, eventually the Wolf Pawnees caught them in Kansas, and Hastings was sacrificed. However, Glass convinced the chief to spare him by way of a gift he had stolen from Lafitte, and he went on to live with the natives for four years. After having lived among them for such a long time, they made peace with the American fur traders arriving in the region, and he joined them, abandoned the Pawnees, and became a Mountain Man.

Now is where the real fun starts. After surviving two Native American massacres, one committed by the Blackfeet and one by the Arikaras, Glass was with a small group of eight men in the woods, led by Major Andrew Henry. While hunting, Glass stumbled into a pissed off grizzly bear mother and her cubs, and was mauled, nearly to death, before killing it with his knife. As they were in dangerous territory, and Glass was too wounded to speak or do anything, Henry opted to leave two men, John Fitzgerald and Jim Bridger, to guard Glass and ensure he was buried upon his death, but as he still did not die, they abandoned him in the wilderness, and told everyone he was dead. This was the biggest mistake of their lives. For Glass was most certainly not dead, and he pulled his way back to civilisation, just to exact revenge upon them. He crawled through 100 miles of Dakotan wilderness, during a timespan of six weeks.

He never got to exact revenge upon them, forgiving them both, and after surviving another massacre, he continued his life as a Mountain Man for ten years, before being killed in a Native American attack in 1833.

Glass has inspired several works of fiction, and many books have dramatized his life. In addition, the 1971 film Man In The Wilderness starring Richard Harris (which famously gave Stephen Colbert his fear of bears) was directly based on his life (albeit with the names changed). More recently, Leonardo DiCaprio played Glass in the 2015 film The Revenant.

Glass stands as a great example of the American Folk Hero.