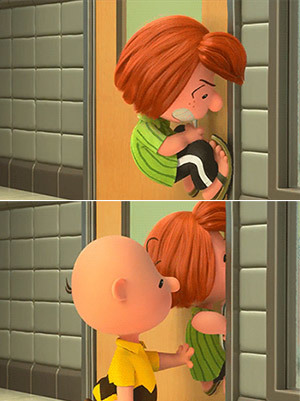 Simply put, this trope is when a character is unable to open a door because they're pushing when they're supposed to pull (or vice-versa, or some other variant altogether). Sometimes the door is clearly marked "PULL", although sometimes it's not. Practically always Played for Laughs.

Most of the time a person who tries to open a door the wrong way will reverse course when it refuses to budge. If the door still doesn't open, that's when people get confused. Many places with double doors like to keep one of them locked, so visitors might mistakenly attempt to pass through the wrong side.

Those with an excess of strength or firepower and a deficiency of restrain may manage to open the door in their preferred direction or create their own, less stubborn, aperture, to the detriment of the attached structure.

Compare We Have the Keys, which is another situation where opening a door is far more difficult that it should be.

The Folded Shy Guy tries to push open a sliding door, and doesn't even notice Mario approaching it.

The Folded Shy Guy tries to push open a sliding door, and doesn't even notice Mario approaching it.