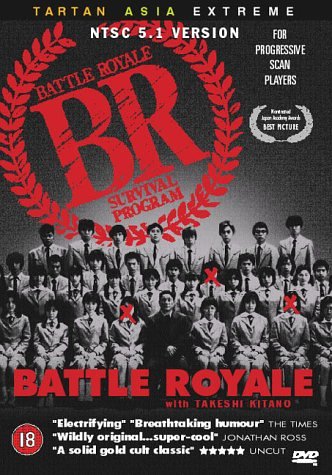 Could you kill your best friend?
"What we went through... All those deaths must never lose their importance. We don't have much, but what we have has to work. Never forget... Never cheapen their deaths by pushing the memory away. Even the worst of them deserved better."
Advertisement:

In a fascist, alternate-timeline Japan, called the Greater East Asia Republic, the government has a unique way of curbing delinquency amongst its youth: It chooses 50 classes of high school students at random every year, then kidnaps the whole class and places them all on an isolated island with no chance of escape. The students are given one weapon each, then — under the threat of death — forced to kill each other until only one student remains alive. This once controversial (but now regularly recurring) military experiment has gone on since 1947, a few years after this version of Japan won a certain war, and is known only as "The Program." Out of the latest such class to "volunteer" for The Program, aspiring rock musician and orphaned teenager Shuya Nanahara has no desire to play the sick game — and every intention of escaping with his life.

Originally a novel by Koushun Takami, Battle Royale was adapted into a live-action movie and a Door Stopper manga series (it has over 3000 pages). The plots of these adaptations have minor differences, but each feature the same general events. An American remake was announced in 2006, but it quickly fell into Development Hell.

One of the main themes of this book / manga / movie is fear and hatred of young people. Several Japanese government officials completely missed this and blamed Battle Royale for a sharp rise in teenage delinquency in Japan.

The book, along with its film and manga adaptations, is the Trope Namer for Battle Royale Game, a video game genre with rules similar to the "game" in the book and its adaptations.

Unrelated to Battle Royal High School despite the title, although otherwise similar in bloodshed.

The Battle Royale novel, film, and manga provide examples of: