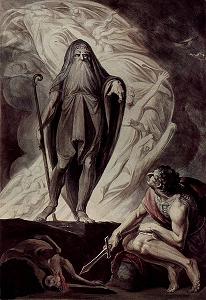 "Do not call up that which you cannot put down."
— Simon Orne, The Case of Charles Dexter Ward by H. P. Lovecraft
Advertisement:

As all witches and warlocks know, summoning creatures from another plane of existence requires a bit of ceremony. Sacrifices and exotic materials may be required along with elaborate ceremonies, but a simple geometric figure and a few candles will often be enough. Of course, there may be a whole other price to pay if the ritual succeeds. Keeping trickster demons and other unworldly apparitions can take a great deal of concentration or chanting; if the protective pentagram should be disturbed... (Never... EVER... break the circle.)

If we're talking about demons, the road to summoning is not easy. You need to learn the magic circles, the true names of various demons, every conceivable precaution against the demon once summoned (as it's a rare demon who likes doing a summoner's dirty work). All told, it takes years of serious study... and heaven help you if you decide you're ready for a real demon midway through your training. Remember, Evil Is Not a Toy!

With an experienced Evil Sorcerer or Sorcerous Overlord; the relationship is a bit different. Said sorcerer is probably already going to Hell, so their soul isn't as valuable; or else they have the demon's playbook on Deal with the Devil. Thus, it becomes a contest of who can benefit more from each other. The Sorcerer gets tidbits of advice and power while negotiating; while the demon manipulates the sorcerer into doing the most evil possible (usually because Humans Are Special, it's different if a human does it) or else getting free. (Humans can usually summon Demons because of Free Will, which a Demon often feels is easier gotten past than from where they came.) ...and even if the sorcerer is perfect in their maintenance, the demon may manipulate any passing heroes into freeing them.

A good rule of thumb when dealing with things from beyond is never to call up what you cannot put down, or summon anything larger than your head. Most people seem to make the grade with just a random mortal from another plane at any rate. Mind you, even if everything goes right, you might end up summoning someone out of the shower!

The classical name for a scene in which some chthonic being is summoned up is a nekyia (νέκυια), which is to be distinguished from a catabasis {κατάβασις} or descent into the underworld.

Contrast Banishing Ritual, though sometimes banishing that which was summoned can be as simple as reversing the original ritual. And do make sure you have all the right ingredients and the stars are properly aligned before you start the chanting, or else you may end up performing an Imperfect Ritual.