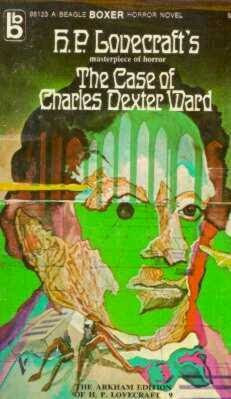 "Do not call up that which you cannot put down."
Advertisement:

The Case of Charles Dexter Ward is a short horror novel written by H. P. Lovecraft in early 1927. Lovecraft never submitted the text for publishing during his lifetime though, due to dissatisfaction with the story, and, as a result, it was first published posthumously in Weird Tales in 1941. This is a bit ironic, as many today consider it one of his most coherent and best stories.

Even before he inexplicably escaped out of a 60-foot-high window of the local mental hospital, Charles Dexter Ward was a puzzling case for his doctors. Already a strange and reclusive young man when he was sane, Charles now exhibited such symptoms as incomplete memory loss, antiquated speech patterns and hand-writing, personality changes, and even small physical alterations. But while the nature of his madness remained a mystery, the cause of it seemed clear: the trouble had all started when Charles became obsessed with digging up information on his great-great-great-grandfather, Joseph Curwen, a sinister shipping magnate from Salem with a reputation for practicing alchemy, lurking in graveyards, importing large quantities of coffin-shaped objects, buying far more livestock than his small household should need, and stubbornly refusing to age normally.

As Charles's family doctor, Marinus Willett, seeks a cure for the young man, he uncovers the horrible truth behind Joseph Curwen's dark reputation and how Charles fell victim to his ancestor's ancient crimes.

The 1963 film, The Haunted Palace, by Roger Corman, although titled after an Edgar Allan Poe poem, is an adaptation of this story. Another adaptation, The Resurrected, was made by Dan O'Bannon in 1991 and went Direct to Video. It is Truer to the Text, retaining a central plot element which The Haunted Palace changed.

A Radio Drama adaptation of the story started airing on BBC Radio 4 in December of 2018. Directed by Julian Simpson, this version is loosely connected to several of his other works, collectively known as the "Pleasant Green Universe". Set in the Present Day, it centers around a team of podcasters, known as 'The Mystery Machine', investigating the disappearance of young Charles Ward from his cell at the asylum in Providence, Rohde Island. Things, inevitably, go wrong from there.

A graphic novel adaptation by INJ Culbard was published in 2012 by SelfMadeHero, part of a series of Lovecraft adaptations.