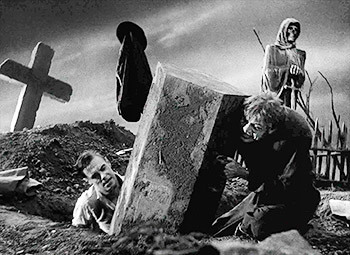 A grave robber digs up a grave or breaks into a crypt or mausoleum to steal the corpse inside, whether it be for medical research, profit by selling the body to medical researchers (which used to be done by shady professions called Bodysnatchers or Resurrectionists), resurrection of the dead, or... whatever reason. This also includes stealing treasure, valuables, and Artifacts Of Doom that happen to be buried with the corpse, not just the corpse itself, especially if the tomb belonged to royalty. In some situations, this can also include vandalism of the corpse if the robber is trying to make a statement or just feels especially spiteful.

In some cases, The Undead, corpses Back from the Dead are the properties themselves. Necromancers are prone to be repeat offenders of this.

This practice is generally frowned upon, to the point that most modern archaeologists have been avoiding burial sites for some time now. Not only is desecrating someone's body after death considered extremely offensive in the vast majority of cultures, it's also pretty gross. Either way, stealing a body from the grave and any items buried with it still counts as theft and is therefore illegal.

This is often part of The Igor's job description. This is the primary way of encountering a Mummy.

If they happened to have fought aliens and/or monsters before taking the crypt's stuff, it probably counts as Plunder.

Do not confuse with Robbing the Dead, which is the taking of personal belongings from a corpse. It should be noted, however, that the term "grave robbing" is used to refer to both tropes.