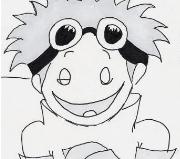 He just wants to make a friend!
Frankie and Stein

is a Webcomic by Margo Zeno about a little Mad Scientist named Stein whose mother tells him to make a friend...
Advertisement:

He robs "the cursed grave" and steals a brain, and, by the end of Chapter 1, Frankie is alive and ready for action!