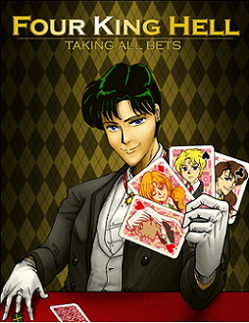 , focused mainly on Mamoru Chiba and his reincarnated guardians, the Four Heavenly Kings.

So, what do you do when you've suddenly been corporeally reanimated after a couple of years as rocks? Why, search out booty! Jadeite's challenge—whoever beds his chosen Inner Soldier first gets to be "main character" for a day—sends the newly humanized Kings and Mamoru into a frenzied contest to win the accolades of their peers and the dignity bestowed on the protagonist of an otherwise Amazon Brigade.

However, things are not as simple as they appear at first glance. While the boys either try to woo their girls (hampered by battery-inducing pick-up lines and violently protective fan clubs) or vehemently deny any attraction at all, it seems that every previous enemy and best-friend-of-the-day is returning to Tokyo for mysterious reasons.

Who will win this contest of mojo? Why are all the important people of the past converging at one place and time? Will Mamoru get his deposit back after his posse finishes with his apartment?

, although only the Smackjeeves account is currently updated. Frizzy also does occasional artwork

Besides many, many of the tropes found in Sailor Moon, Four King Hell also provides examples of: