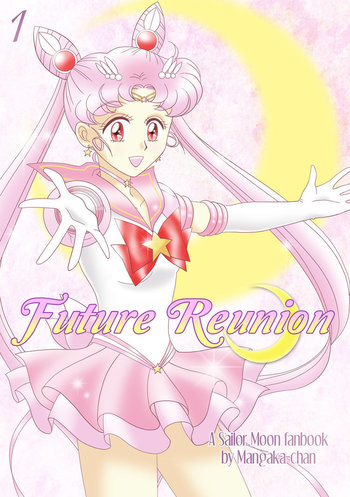 . The story is set in the 30th century, where a now-not-so-chibi teenage Chibi Usa goes to junior high with Hotaru and her Sailor Quartet senshi. One day after school, Chibi Usa encounters a boy named Shou Hinowa, who bears an uncanny resemblance to Helios. Soon after, a mysterious enemy appears in Crystal Tokyo, and Chibi Usa begins to wonder if Shou’s resemblance to Helios is more than just a coincidence.

The premise of the story is based on the oft used Fandom-Specific Plot where Chibi Usa is reunited with Helios in the 30th century (something that the artist herself acknowledges), but the mystery behind Shou's identity and the detail the artist puts into her work (not to mention the fact that her art is incredibly similar to Naoko Takeuchi's style) has this troper hooked.

The comic is posted on Mangaka-chan's DeviantArt page

as well as on her Tumblr

Future Reunion has examples of: