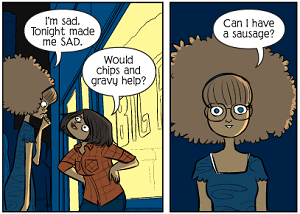 Sausages generally help.
"Oh, this is my favorite thing to eat as a boy. My gran used to make this for me whenever I was feeling a little sad. You know, if my cricket team lost or a girl I fancied turned up her nose at me."
— Richard Gilmore, Gilmore Girls
Advertisement:

A "Comfort Food" is a familiar food that a person eats because doing so relieves stress and anxiety and increases contentment and comfort (hence the name). It sparks happy memories, brings back feelings of security and safety, and thus can easily lift a person's mood.

Comfort food for most people tends to also be their favorite food, or the food they enjoyed the most while growing up. In his book A Cook's Tour, Celebrity chef and television host Anthony Bourdain noted that, among big name chefs who specialize in fine cuisine at their restaurants, the most common type of answer to "If you were about to die and had time for one last meal, what would it be?" were meals like "my Grandmother's meat loaf" or "a nice hot ham-and-cheese sandwich" or "Oreos and a tall glass of ice cold milk". Other common answers were things like "a Big Mac," "mint chocolate chip ice cream," "an entire bag of Lay's Barbecue chips," and "a chili dog."

In other words, Comfort Food.

Because corporations know a cash cow when they see it, there are entire restaurant chains devoted to serving you comfort food, like Bob Evans, Cracker Barrel, and Boston Market.

May overlap with Your Favorite, Trademark Favorite Food, Food as Bribe or Post-Stress Overeating. Heartbreak and Ice Cream is a common Sub-Trope. See also I Need a Freaking Drink, Drunk on Milk, and Drowning My Sorrows. Calming Tea is when tea is specifically used to de-stress. See Soup Is Medicine for food that helps when you're ill. Contrast Too Unhappy to Be Hungry.