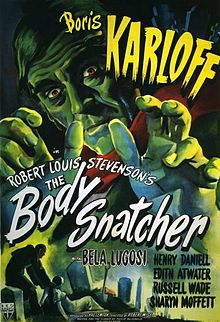 Dr. MacFarlane: What is Gray to me? He's a man from whom I buy what I need when I need it. The rest is forgotten.
Meg Camden: You may deny him, Toddy, but you'll not rid yourself of him by saying the devil's dead.
Advertisement:

, The Body Snatcher is a 1945 horror film directed by Robert Wise, and produced by Val Lewton. It is notable for being the last film to have both Boris Karloff and Bela Lugosi together.

Set in Scotland in 1831, the story opens up on an aspiring young man, Donald Fettes, who is training to be a doctor under one Dr. Wolfe "Toddy" MacFarlane. However, Dr. MacFarlane's dirty secret is he has hired a cabman, John Gray, to dig up bodies as specimens for dissection. Soon, the doctor starts to get blackmailed by his worker, who in turn began murdering to provide fresher bodies.

Lugosi, despite being billed second, has a fairly minor role as Joseph, the doctor's dimwitted servant. This was one of the last halfway decent acting parts for Lugosi, whose career by this time was on a long slide that ended with Ed Wood movies.

Karloff, on the other hand, gives one of the finest performances of his career.

Not to be confused with the sci-fi movie Invasion of the Body Snatchers.