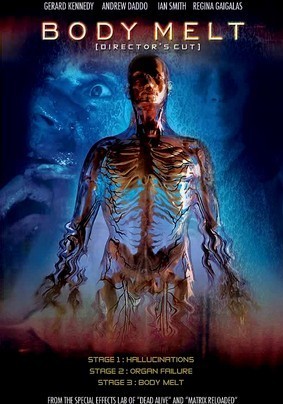 "The first phase is hallucinogenic. The second phase is glandular. And the third phase is... AAAAAARGH!!"
Advertisement:

A 1993 horror film from Australia, Body Melt is pretty much Exactly What It Says on the Tin. A health farm by the name of Vimuville is sending free samples of their new wonder vitamins to the residents of Pebbles Court. Unfortunately, these new vitamins have some rather nasty side-effects; after suffering the two symptoms mentioned, the people who use it have a bad habit of mutating and, well, melting. After one of the farm's employees tries and fails to warn the residents not to take the drugs, much nastiness ensues...