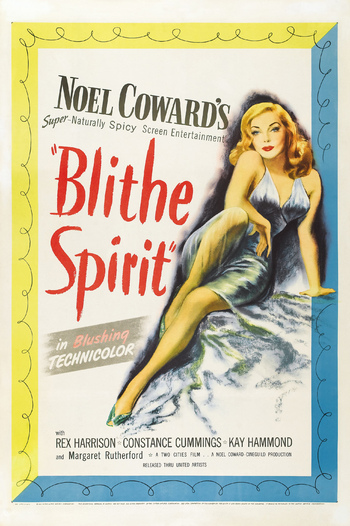 Blithe Spirit is an upper-class farce written by British playwright Noël Coward, who claimed to have written the entire play from beginning to end in five days. It premiered in the West End in July of 1941, becoming the biggest hit of Coward's career in both England and America.

Charles Condomine, an author/socialite, invites famed medium Madame Arcati over for dinner and a seance in hopes of gathering research for his latest book. Things go awry when the spirit of his deceased wife, the temperamental and seductive Elvira, is called back from the otherside. This intrusion proves to be somewhat upsetting to his current wife of five years, the rather stuffy Ruth. Hilarity Ensues.

The 1945 film adaptation was directed by David Lean and starred Rex Harrison as Charles, with Constance Cummings as Ruth and Rutherford and Hammond reprising her stage roles. Angela Lansbury played Madame Arcati in a Broadway revival and recreated her role in the West End in 2014. In 1964, the play was adapted into a Broadway musical, High Spirits; Coward co-directed the original production of it. A new film adaptation directed by Edward Hall and starring Dan Stevens and Judi Dench eventually apparated in January, 2021.

Not be confused with the trope Blithe Spirit, although you could, if you really wanted, make an argument for a character or two fitting that trope.