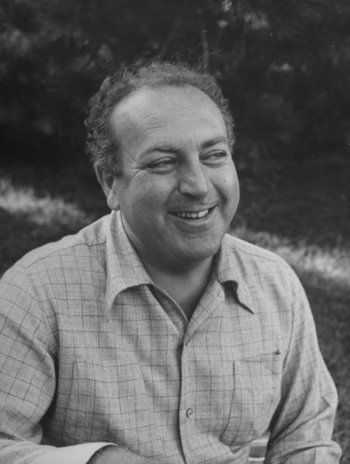 "It is perhaps characteristic of Lewton's career that [I Walked with a Zombie], one of the rare pieces of pure visual poetry ever to come out of Hollywood, was seen by hardly anybody but ... bloodthirsty chiller fans."
— Joel E. Siegel, Val Lewton: The Reality of Terrornote quoted in Ivan Brunetti's comic strip "Produced by Val Lewton", printed in Schizo #4
Advertisement:

Val Lewton (born Vladimir Ivanovich Leventon, Russian: Владимир Иванович Левентон, May 7, 1904 – March 14, 1951)) was a Hollywood producer and screenwriter for MGM and RKO. He worked as a radio writer, pulp novelist and studio publicist before coming to MGM. At MGM, he worked with David O. Selznick on A Tale of Two Cities and Gone with the Wind, variously as a script doctor, second unit director and personal assistant. At the beginning of his writning career, he semi-frequently wrote under the pseudonym of "Carlos Keith" and was credited as such.

In 1942, Charles Koerner placed him in charge of the "B"-picture unit at RKO. Lewton had to follow three rules for each film:

As long as he followed these three rules, Lewton had complete creative freedom.
Advertisement:

What followed was a series of clever subversions: Koerner gave him a lurid horror title, and Lewton turned it into something subtle and meditative, while still making it appropriate enough to the title that his superiors wouldn't get annoyed. He made ten films under this system, working with directors like Jacques Tourneur, Robert Wise and Mark Robson:

Lewton was noted by friends and family to be a massive workaholic, and this probably greatly contributed to his failing health at the end of the 1940s and start of the 1950s, culminating in several heart attacks and eventually a quite early death at the age of 46.

Lewton became a major influence on the horror genre and filmmakers in general. Michael Powell, Carol Reed and Martin Scorsese are among the many directors who cited him as an influence on their work. Jacques Tourneur, Robert Wise and Mark Robson all directed films for Lewton, and moved on to successful directing careers.