Film / Invasion of the Body Snatchers 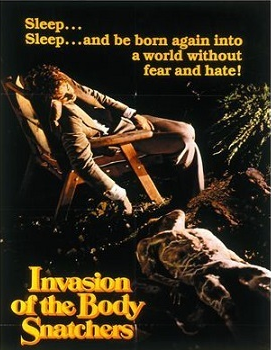 Poster for the 1978 version, which summarizes the supposed advantages of the new world.
Advertisement:

One morning, you notice something odd about your spouse. You can't quite put your finger on it. They look the same, talk the same, even have the same birthmark on their left shoulder. But, something is wrong. Somehow, they are no longer your loved one. There's a certain emptiness to them, void of feeling. They're also going out a lot more, far more than you've known them to. You see them getting into strange cars, meeting random people, and trading odd packages between them, all without saying what they're doing or where they're going. Soon, everyone around you has changed. Whatever's happening is spreading, getting stronger by the minute. And you're next.

Invasion of the Body Snatchers is a series of Sci-Fi Horror films revolving around an invasion of "pod people" who infiltrate the Earth by replacing humans with duplicates. Originally a 1956 film (which was itself based on a novel), the concept seems to resonate particularly well with new generations. It has been remade no less than three times since with various changes to the plot.

Warner Bros. is currently working on a fifth version

Not to be confused with the horror movie The Body Snatcher.

These films include examples of: