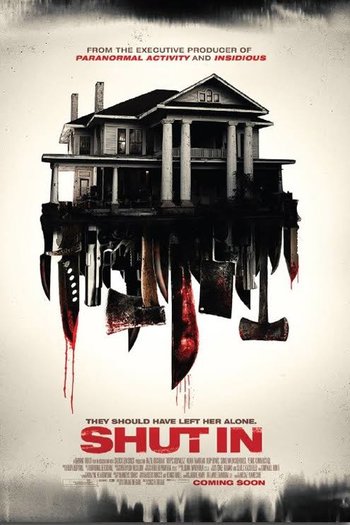 Intruders, also known as Shut In (no relation to Shut In), is a 2015 psychological thriller directed by Adam Schindler and starring Beth Riesgraf, Rory Culkin, Martin Starr and Jack Kesy. Riesgraf plays Anna, a severely agoraphobic woman who has not left her house in over ten years. Rory Culkin is Dan, the delivery boy who has been bringing her food for the past year. At the beginning of the film, Anna's brother, Conrad, is dying of pancreatic cancer. After his death, Anna is left alone in the house, unable to even get herself to leave for the funeral. Which is unfortunate, because a trio of men plan to search the house for presumed riches...
Advertisement:

J.P. Henson (Kesy) is the leader of the group, trying to keep them on-task. His younger brother Vance (Joshua Mikel) is reluctant, but he needs the money, and does not want to disappoint his brother. Perry (Starr) is the psycho of the bunch, always suggesting they just kill their hostage to avoid trouble. Trapped by her agoraphobia, Anna can't even escape through an open door, so they have her thoroughly trapped. Except, as it turns out, there's more to Anna than her agoraphobia, and maybe she isn't the one trapped.