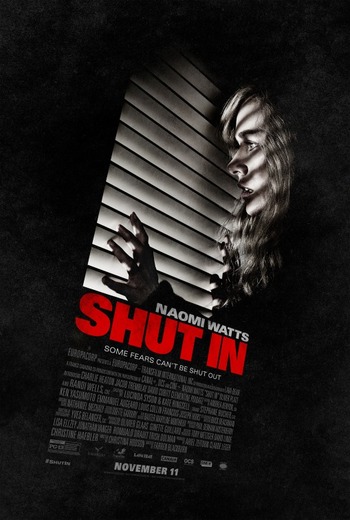 Shut In is a 2016 horror/thriller film directed by Farren Blackburn of Daredevil (2015) fame, starring Naomi Watts.

Mary Portman (Watts) is a widowed child psychologist living alone with her paralyzed stepson Stephen (Charlie Heaton) in rural Maine. She has to deal with the trauma of the car accident that killed her husband and paralyzed Stephen with the help of her psychologist friend Dr. Wilson (Oliver Platt).

When a deaf young boy named Tom (Jacob Tremblay) stays with them for a while before mysteriously vanishing, Mary has to survive an approaching winter storm while trying to find him. On top of that, strange events occur which seem to indicate that there is someone (or something) else in the house that wishes them harm, and Mary must fight to stay sane…

No relation to Intruders which was also released as Shut In.

Shut In provides examples of: