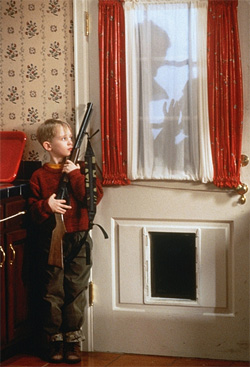 "This is MY house.
I have to defend it!"
"A man's home is his castle, but it shouldn't have to be a fortress."
— Dad, Calvin and Hobbes
Advertisement:

The main character's home comes under attack or siege by some sort of malign force, whether it be foreign, criminal or supernatural. He or she then has to look after the safety and security of his or her person, possessions, family and possible guests, either by driving away the invader(s) or by keeping them at bay until The Cavalry can arrive.

A very wide-ranging trope: Can be found in The Western (native braves, outlaws or evil company types besieging a Determined Homestead), Horror Films (monsters terrorizing an isolated country home) and Crime Thrillers (burglars attempting to break into an otherwise quiet suburban dwelling and terrorizing the inhabitants).

"Home Alone" Antics is a Lighter and Softer, Played for Laughs version, which doesn't necessarily have to take place in a house. It's interesting to note that the main difference between the two is the age of the defender: to a kid, fighting off burglars inside your house sounds like a wacky adventure. To a parent, it sounds like a nightmare.

A Sub-Trope of "Die Hard" on an X; compare All Your Base Are Belong to Us and The Siege.