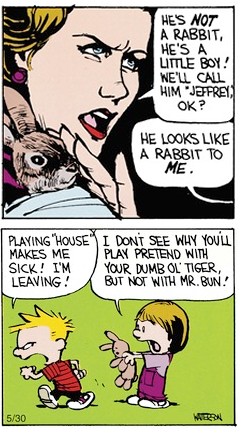 Susie: Hey Calvin, you want to play "house"?
Calvin: I don't know. How do you play?
Susie: Okay... first, you come home from work. Then I come home from work. We'll gripe about our jobs, and then we'll argue over whose turn it is to microwave dinner.
— Calvin and Hobbes
Advertisement:

A game in which children take on adult roles, focusing on domestic matters.

Playing "house" is a common game among young children, trying on adult roles seen around their homes. As opposed to the more boisterous Cowboys and Indians games, "house" revolves around day-to-day matters such as husband-and-wife negotiations, childcare (usually with dolls or pets in the "child" role), cooking (mud pies are the traditional fare) and tea parties. Stereotypically, this is a girls' game that boys are roped into with some degree of unwillingness. In Britain, this game is traditionally called "playing Mummies and Daddies".

In fiction, kids playing "house" can be evidence of a Toy Ship (though often one-sided), demonstrate a childish misunderstanding of family life (either innocently or because their home is actually that twisted), or be a commentary on the goings-on of the adults who are the main focus of the story. A common "bit" is a young boy forced into a humiliating "baby" or "mommy" role by an innocently sadistic female playmate.

Sometimes Innocent Cohabitation will jokingly be called "playing house" as the cohabitors fall into the roles of a married couple without the full benefits of same. It can also be used as a mocking euphemism for non-innocent cohabitation — the implication being that the relationship needs a legal marriage before it counts as real (it's a more upscale version of the term: "shacking up").

See Promotion to Parent for a much sadder trope related to this.