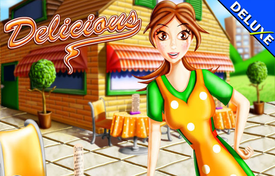 and currently developed & published by GameHouse

acquired the rights. The games tell the story of Emily, a waitress who aspires to one day run her own restaurant, and who works in several other restaurants in order to earn the money to make her dream come true.

It is also well-known and favored by many people due to its detailed and Visual Novel-esque story telling that makes the games natural but memorable. The series actually started to grow in to fans when the fourth installment of the series was released and has been since receiving positive reviews from gamers and critics. The fifth installment, Delicious: Emily's True Love received a full five-star rating from Gamezebo.

If you are a fan of this game, then check out its booming Facebook page

The games in the series so far are:

There are also spin-offs and games that share characters with or at least are stated to be in the same universe as the Delicious series. They are:

Message In A Bottle