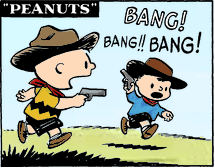 "Are you ready? You're the bad guy. And when you're bad, you just run. That's fine, right? Well... Shall we play?"
— Majora's Mask Moon Child, The Legend of Zelda: Majora's Mask
Advertisement:

Or "Cops and Robbers," "Spacemen and Aliens," "Prosecutor and Defendant" and many other variations.

A game where children play out a battle between two opposing forces, generally considered as a struggle between good and evil. A trope both in fiction about children, and in fiction about adults who sometimes interact with children.

Generally, there will be more competition for the "good guys" role, while less popular or socially adept children will get stuck with the "black hats." True friends will make sure to switch the roles around fairly, and watch out for that one kid who's always eager to play the villain—he'll probably be trouble later on.

Sometimes the children will learn An Aesop about the dangers of war or prejudice, or how cultural perceptions change over time, causing Values Dissonance.

In stories starring adult characters, the children's pretend battles are generally used as commentary on or echoes of the main plot. For example, if the hero has been doing poorly, he might overhear a child complain about having to take his role in a game. Or hearing his excuses for wrongdoing coming from a child might prick a character's conscience.

A Tabletop Role-Playing Game is essentially this kind of play, but with precise rules, statistics and a referee to make it function properly as a narrative scenario.