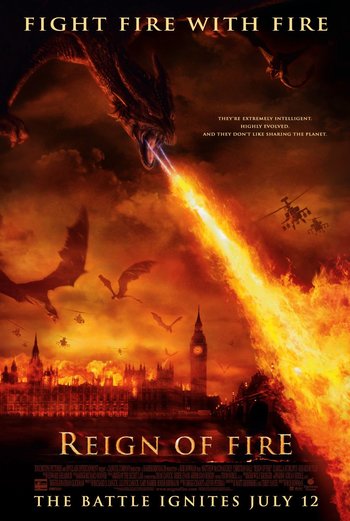 In 2008, 12-year-old Quinn Abercromby stumbles upon a sleeping dragon recently unearthed at a construction site in London. Said dragon then awakens and proceeds to decimate the construction site and kill everyone present, except for young Quinn. Before long more dragons hatch and proceed to multiply across the face of the Earth at an exponential rate, burning human civilization as they go. After Paris is burnt to the ground and attacks in Kenya kill dozens of people, the humans decide to just nuke the dragons out of existence. Unfortunately, this backfires, and while they do kill some dragons they also end up wiping out human civilization as we know it and sending the survivors back to the dark ages.

12 years later, Quinn (Bale) is leading with his best friend Creedy (Butler) a small band of surviving humans living in Bamburgh Castle in Northumberland. The people hope to survive by keeping their heads down until the dragons run out of food and starve themselves to death, as fossil evidence in Antarctica suggests they had before. Unfortunately, a dragon follows some of the people back to the village and burns their crops. Days later, a band of American dragon hunters, led by Denton Van Zan (McConaughey) and Alex Jensen (Scorupco), comes to the village. After killing the dragon that burned the crops, Van Zan reveals that all of the dragons seen in the world are female, and there is only one male, who fertilizes the females' eggs like a salmon. If this dragon can be slain, the dragons will be unable to reproduce.

Received two Licensed Games, one for the PlayStation 2, Nintendo GameCube, and Xbox (notable for the PS2 and Xbox versions to get an M rating while the Gamecube version received a T), and another for Game Boy Advance. Both games can put the player in the role of either a human or a maturing dragon.