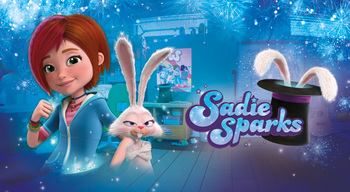 Let's be magic!
"Come on Sadie, magic waits for you
You're a wizard in the making and your magic's true
You're not alone so don't be overwhelmed
Gilbert's here to help you from the Magic Realm
But 'ya gotta listen... listen to the bunny now
The grumpy, magic, bunny bunny bunny!"
— Expository Theme Tune
Advertisement:

As the theme song perfectly explains, the series follows the enchanting misadventures of a 14-year-old girl, Sadie Sparks, who finds out she has magical abilities and becomes a wizard-in-training with the guidance and mentorship from a very old and grumpy rabbit, Gilbert. He was sent to the human world from the Magical Realm to train Sadie and harness her volatile magical skills. Sadie must navigate the challenging world of high school, juggling exams whilst training to be a wizard, on top of keeping it a secret to all but her best friends, Teepee and Lulu, who accompany her adventures.

The art style of the series is typically CGI, but the Magical Realm segments are done in 2D.

Sadie Sparks premiered 20 April 2019 on Disney Channel in the UK and Ireland, but the first episode was released a week earlier on their YouTube channel. The series is also planned to premiere in the US on the same channel. The intro to the series can be seen here

, and the trailer here

This show contains magical examples of the following tropes: