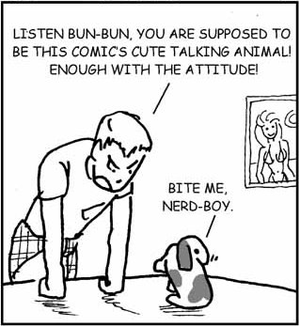 "When I volunteered for this mission, I never thought I'd end up playing straight man to a tin can."
— Lt. Pizer regarding V.I.N.CENT., The Black Hole
Advertisement:

You'd be amazed at what being small and cute will let you get away with.

He may be a sassy little beast with a heart of gold who gripes about the dangers of accompanying the hero, but ultimately follows him or her out of loyalty. Or he may be a sociopath who mocks the idealistic rest of the cast and the villains alike, always getting the last word. His popularity ranges from The Scrappy to fan favourite in the same fandom. Every second webcomic has one because nothing screams nerd-humor quite like having a token little mascot that swears like a sailor and/or brings hookers to your place when you're absent for the night.

For some reason, it's often a "he," even when it's hard to understand what about his physique qualifies him as male.

Cats and/or vaguely cat-like things are common, as are toasters, for some reason.