Literature / Use of Weapons 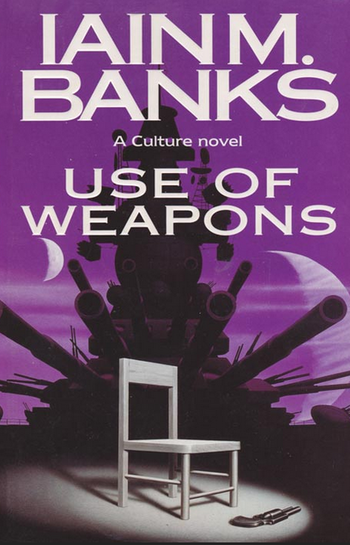 Use of Weapons is a science-fiction novel of The Culture by Iain M. Banks. It focuses on Special Circumstances and their extensive use of the Omniscient Morality License via the character of mercenary-extraordinaire Cheradenine Zakalwe, a man from outside of the Culture, but who does their dirty work. The story is told through chapters alternating between those going in normal chronological order and those in reverse order that slowly reveal the main character's Dark and Troubled Past.
Advertisement:

This is actually the first novel Iain Banks wrote, although it was published much later. Many consider it his masterpiece. As a side note, this article completely fails to do it justice, so be prepared for emotional gut punches by the dozen if you actually read it. Also be aware that most of the spoiler tags below hide something you really don't want to know before reading it.

Use of Weapons provides examples of the following tropes: