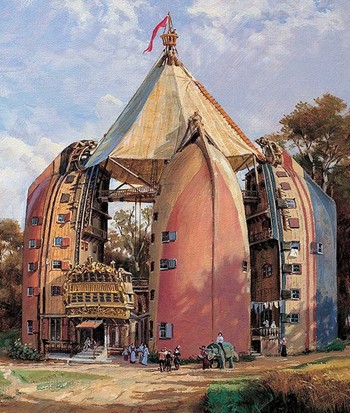 Gives a whole new meaning to the term "boathouse."
"Remnants of the Naval Research Institute cleared the mirelurks off this wreck about 40 years ago. We were looking for new lab space, and this bucket of bolts just happened to have a well-preserved science bay on it. Everything else just grew up around that lab once we got it up and running."
— Horace Pinkerton on Rivet City, Fallout 3
Advertisement:

On the occasion that a seafaring vessel is retired, it's usually broken down for scrap or sunk to create an artificial reef. But in some cases, ships get a second lease on life... on land.

When Boats Into Buildings comes into play, marine vessels are hauled out of the water and used to create permanent land-based structures. Homes are the most common example, but businesses, schools, town halls, even secret bases and storage sheds are all options.

The ships might be taken apart for raw material to create new buildings, but more often they're re-purposed without the need for too much deconstruction. In the simplest case, ships can be dragged ashore and hooked up to utilities like an RV. In others, the boats might be flipped upside down to create a sturdy, pre-built roof from the water-tight hull.

Note that these aren't just structures that superficially resemble ships - actual boats must have been used in the construction in order to qualify. This trope also tends to exclude modern craft constructed out of fiberglass, rather focusing on medium-to-large wooden boats and large metal-hulled ships. note  Fiberglass is difficult to recycle without access to expensive modern facilities to cut, mulch, pulverize, and/ or chemically decompose the material, whereas wood can be hewn and metal can be shaped to fit the needs of the builder. The (relative) cheapness and availability of fiberglass crafts in modern times also means they aren't romanticized the way wooden and metal ships are — few people will view a derelict fiberglass hull as suitable building material or as a proud ship worthy of preservation and reconstruction on land.

In fiction, a beached boat such as this might be the home of an extra-quirky Houseboat Hero, or the retired form of a Cool Boat. Compare and Contrast with Saharan Shipwreck (when a boat on dry land serves as a surreal set piece) and City on the Water (wherein cities are constructed so as to float on the water like a boat).