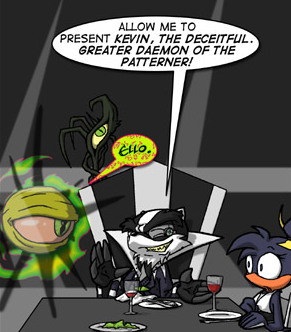 George the Tyrannical and Justin the Bloodthirsty were busy.
"Yes, that's right, the most evil wizard of all time... Tom."
— RiffTrax on the Trope Namer, Tom Riddle aka Voldemort
Advertisement:

When a character that's evil doesn't have a particularly evil-sounding name. While generally Played for Laughs, this can also be used to chilling effect in combination with tropes such as From Nobody to Nightmare and/or Paranoia Fuel. Tom the Dark Lord sometimes goes hand in hand with Embarrassing First Name, but not always. Bonus points if it manages to be meaningful or ironic. Contrast with Names to Run Away from Really Fast, which is about evil people with Obviously Evil names. Also contrast Louis Cypher, which are names that indicate someone is a/the devil; these may include a normal first name (especially a variant of Lou/Lucy or Nick) but overall are not normal names because they're too much of a pun.

This is for the most part, a trope exclusive to fantastic settings, in a work sets in a realistic human society, the bad guy will have a normal human name without intent of this trope being played as opposed to antagonists such as an Evil Sorcerer or Eldritch Abomination whom you wouldn't expect to be named Alex or Sam.

A common justification of this trope is that the villain used to be a regular human in the past. In this case, they may end up picking a new name. See also, Demon of Human Origin.

Subtrope of Ominous Mundanity. See also Fluffy the Terrible, which is about vicious animals and beasts with cutesy names. Compare Special Person, Normal Name. Not to be confused with Ron the Death Eater, although that can lead to this in fan works.

She actually manages to bring her sacrifice to a screeching halt by revealing this fact, leading the cultists to start bickering about it.