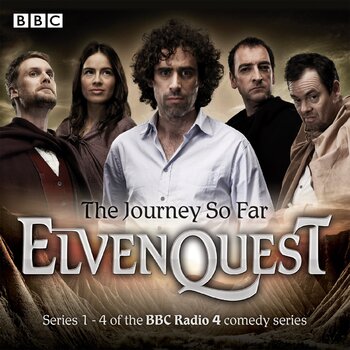 ElvenQuest is a British radio comedy broadcast on BBC Radio 4.

The story follows Sam Porter, a misanthropic fantasy author, who is visited by three strangely-dressed people he believes to be cosplaying fans. However, when they attempt to steal his dog, Amis, in the belief that he is The Chosen One, Sam follows, only to be drawn into the fantasy world of Lower Earth, where Amis is transformed into a human, though keeps his dog-like tendencies. Soon, Sam is dragged along on a quest for the Sword of Asnagar, along with dim elven prince Vidar, beautiful but naive warrior princess Penthiselea, and stubborn dwarf Dean, all the while pursued by Lord Darkness and his servant Kreech.

Not to be confused with ElfQuest.