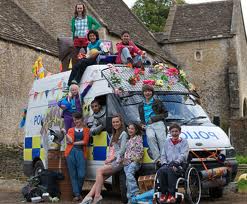 "What are we going to do?"
"Anything we like!"
Advertisement:

The Sparticle Mystery (2011–15) is a British tv series about a world where everyone over the age of 15 suddenly vanishes. Sound familiar?

Actually, it's not. After the first few episodes where the kids get used to their new situation, they go on a mission to bring the adults back. Many fans started watching the series to prove that it was a rip-off of Gone or The Tribe, and ended up actually liking it.

The main characters of the series are: