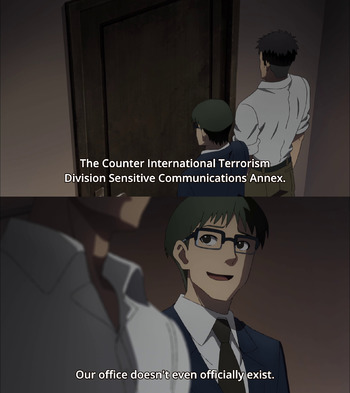 Look, you're living in a world where magic exists. I'm sure the bad guys will find a way to unearth the agency.
Cooper: I didn't know this place existed.
Records Keeper: It doesn't.
— Red

A step up (or down) from a Covert Group is a government agency whose very existence is officially regarded as an Urban Legend and denied by The Government officials. This allows them to maintain Plausible Deniability, in case the agency's activities (which are often of the black ops variety) become known to general public. If, by chance, any outsiders learn of it, they will say I Was Never Here.

The Trope Namer is the US National Security Agency, which from 1952 to 1957 officially didn't exist. Even after that they were very reticent about what they did* for the record, their job is primarily cryptology and analysis of electronic intelligence, leading many in the government to snark that the abbreviation NSA really stood for "No Such Agency."

Subtrope of Government Agency of Fiction and Covert Group and often a supertrope to The Men in Black. Compare Government Conspiracy. May overlap with Benevolent Conspiracy and Milkman Conspiracy. Likely to reside in a Black Site. Parody examples may employ a Suspiciously Specific Denial.