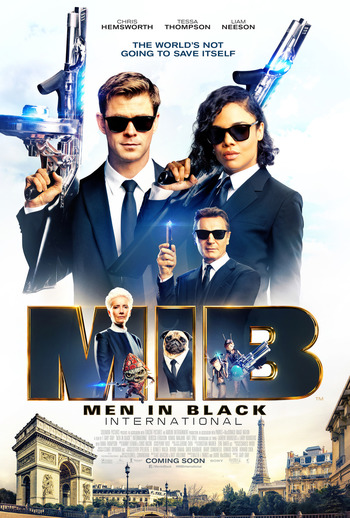 "You really think a black suit is going to solve all of your problems?"
"We protect the earth from the scum of the universe. With agents in every major city around the world, some more decorated than others. Agent H, you’re one of the best ever to wear the suit, but you’ll need a partner."
— High T
Advertisement:

Men in Black: International is a 2019 Science Fiction action comedy, and the fourth film of the Men in Black series, directed by F. Gary Gray (Straight Outta Compton, The Fate of the Furious) and written by Art Marcum & Matt Holloway (Iron Man).

Molly Wright lived her life being aware of the existence of aliens and the Men in Black ever since avoiding neuralisation as a child. Finally landing a lead on them as an adult, she infiltrates their New York headquarters and insistently volunteers herself to be recruited into the agency. Impressed by her tenacity, Agent O recruits her under the codename "Agent M", and sends her to MIB's UK branch for probationary training. There, M assigns herself to partner with Agent H, UK's top agent who has gone soft ever since defeating an evil race of aliens known as the Hive with his former partner and current head of the UK branch, High T, three years ago. When a pair of shapeshifting aliens seeking a Weapon of Mass Destruction arrives on Earth, hinting at the return of the Hive, it is up to Agents H and M to travel the world to keep the weapon safe, find The Mole amongst their ranks, and save Earth from the impending second arrival of the Hive.

Conceived as a spinoff, it is the first film in the Men in Black series to not feature Will Smith and Tommy Lee Jones as Agents J and K. Replacing them as leads are Chris Hemsworth and Tessa Thompson as Agents H and M, respectively, while Emma Thompson reprises her role as Agent O from Men in Black 3. Also in the film are Liam Neeson as the head of the UK MIB branch, High T, as well as Kumail Nanjiani, Rafe Spall, and Rebecca Ferguson.