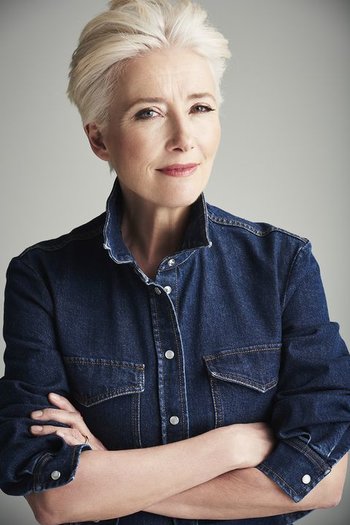 "Children are the most wonderful audiences. What's struck me most is that that they watch it so silently, until the end when they shriek and shout and clap."
Advertisement:

movies, as well as Sense and Sensibility, Dead Again, Stranger Than Fiction, Nanny McPhee, and Saving Mr. Banks. Introduced Fry to Laurie, thus making her responsible for a veritable English institution. Also almost played God (it was decided that Alanis Morissette would be funnier). Has a very vitriolic friendship with Stephen Fry, who has seen her naked more than once.note She says that Fry finds the naked female body overwhelming and that one of her favorite pranks to play on him when they were younger was to lock all the doors and then sashay toward him in the nude knowing he'd have trouble opening all the locks in his terror

Thompson is also the only person who's won Academy Awards in both screenwriting (Sense and Sensibility) and acting (Howards End). Compare with Barbra Streisand, Laurence Olivier, George Clooney, and Michael Douglas, who also have unusual Oscar combinations.